One of the most satisfying feelings in life is waking up at 5am, going to the kitchen to drink a glass of water while casually scrolling through Twitter on your phone and finding someone (on the Twitter feed, not in the kitchen) that is right on the internet*:

Does anyone else find the use of $ or whatever at the start of commands like this frustrating?

Yes, it delineates commands, but it means you can't easily copy and paste. pic.twitter.com/UJKUEk4JrE

* Where right means: someone else is saying something you always thought of, but never quite found time/space/willpower/occasion to express to a wider audience or even to yourself. 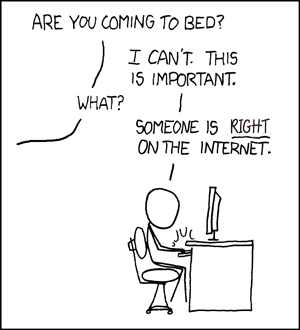 Let’s begin with a disclaimer: this is a clear case of first world problem that really has no great meaning in the grand scheme of things, and the arguments against it are still valid. I just found it amusing to see I wasn’t really the only one being mildly frustrated by it.

I also think that the discussion that ensued is interesting and worth reading.

When setting up a project you might need some setup and most of the times this involves running a handful of shell command.  An example:

Ok, now try copy pasting those 3 lines in one go… Chances are you will see as output something like this:

What does $ even mean

There are a few reasons why $ is prepended to every line of a shell command example:

Why you should not remove $

Some valid arguments in favour of keeping the $:

This is sometimes also done to actively discourage copy&paste of multiple (or single) commands from the web because it's NEVER a good idea to do so. Browsers don't filter out invisible content when you do. Almost as bad as a wget or curl piped to a shell.

Seems to be an unwritten law, $ for normal user, # for admin.

The case for removing $

In the  thread another user makes an great point

If the code block is to demonstrate the 𝑜𝑢𝑡𝑝𝑢𝑡 of a command, then I include the $ (one line only) to differentiate the command from the output.

Otherwise, leave them out so the block can be copy/pasted.

If you have read so far and sort of agree that we might be better off not including the $ in shell samples, here’s a few ways to make it happen.

Just don’t type it! This applies to Github and pretty much all places where you have no control over how code samples are rendered. A post on Dev.to is one example.

If you have control over the rendering and you still like you readers to see the $, consider using CSS to remove it from the text that ends up in the clipboard when copying. In the thread, Twitter user @beccadottex shares a Codepen of how this can be done.

@theconfigurator shares another one here

It's pretty easy to do, and makes the UX so much better.

Should you really stop using $?

As any other opinion based topic, there seems to be far from an agreement on the best practice around this, as the long thread on Twitter shows.

As for myself, I always found it redundant and pointless but funnily enough I found myself using it out of habit. From now on, I will purposefully keep the $ out of my docs.